Trinayani was formed with a vision to create awareness about people with disabilities, how they are still capable of seizing an opportunity if given one. We cannot just preach about what we believe in and expect people to come join the bandwagon. So to create a better impact and explain in a clearer manner, we came up with inclusive events where people with, not only different disabilities but also people with no disabilities and from various other diversities are invited to participate and belong. (Force issue in the public domain. Inclusion of disabled and non-disabled).

Trinayani took it to the Kalaghoda Art Festival in 2016 to disseminate awareness on disabilities and inclusion of those with impairments to help empower them.

At the festival, we had a sculpture called ‘Let’s Talk’, crafted by Hasmukh K. Angari (a deaf blind), Shankar M. Bhoya (an artist and trainer) and Nantu Behari Das (a professional sculptor from Kolkata), which had the American sign language alphabets protruding on it. 5 such fibreglass sculptures were installed on the Rampart Row as part of the Visual Arts initiative from the 6th till the 14th of February, which allowed us to represent the world of persons who are deaf and deaf-blind. 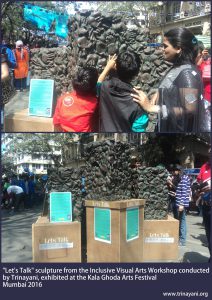 We organized Improv-Ability worksop to celebrate International Women’s Day on the 12th of March, 2016 to help women with disabilities develop their personality by doing improvs on stage. The workshop was supported by Crayon, Improv Comedy House, Mumbai and was conducted at the venue- The Den. The audience consisted of people with various disabilities and of non-disabled people. 14 women participated and tried their hand at doing an improv; most of them were doing it for the first time. Of course, a sign language interpreter was present to facilitate the event for our deaf friends. 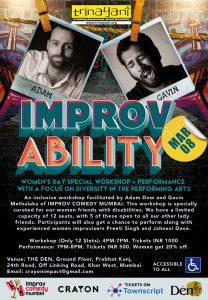 7th July of every year identifies as International Chocolate Day and we at Trinayani decided to celebrate this event. Carrying forward the decade long essence of our motive to empower people with disabilities, we invited our wheelchair user friend Dinkle Shah, a professional chocolate maker and a national level basketball player, to share her knowledge on chocolate making. The workshop was conducted for a group of deaf students, from Sanskardham College of Deaf Education, who were accompanied by their sign language interpreter who explained them the process simultaneously.

The idea was to involve them in a sweet and delectable workshop where they learn the skill of chocolate making as well as a fancy way to wrap and pack them as a take away. 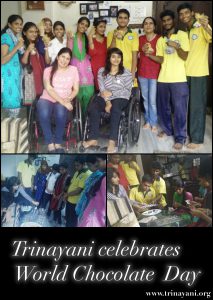 A short video about the event can be viewed at:  https://www.youtube.com/watch?v=JZ2dLO_bC1s&t=22s

Carrying our agenda ahead, we took it to the compounds of HPCL colony to design their Disability Inclusion month, spread the word about disabilities and how we wish to normalise the term in people’s minds. To do so, we took some of our unique assets to execute this objective for over the months of July-August, 2016. On 17th July, four blind therapists of Sparsh Spa provided massages to about 40 members of the Ladies Club of HPCL colony. Two days later we conducted our Snakes and Ladders Club and an inclusive Treasure Hunt for the children of HPCL colony.

Our Inclusive Music band, Pehli Baarish put up a show filled with music, glee and cheers for a melodious half an hour on 20th July for the Ladies club. After the relaxation, adrenaline and music, it was time for something more colourful. On 6th August, we facilitated the dance performance of Kolkata based dance group ‘Anwesha-The Quest’ and the intellectually disabled dancers put up a mesmerizing piece on stage, which was their first ever performance in Mumbai.

A short video about the event can be viewed at:://www.youtube.com/watch?v=d3HnORDBzjQ

Triyanani decided to involve our friends with disabilities to participate in the Daan Utsav, held during 2nd Oct to 8th Oct 2016. Here they spoke about how people with disabilities are not mere receivers of support but also capable of giving back to the society. They proved their statements by conducting workshops and giving talks for participants with and without disabilities over the week across Mumbai. They celebrated the joy of giving along with spreading awareness about how all of us are interdependent on each other and only giving will lead to gaining.

A short video about the event can be viewed at: https://www.youtube.com/watch?v=4aIg7Q7kgX0

On the 7th of October in Rabindra Sadan, Kolkata, Trinayani presented a half an hour module of song and dance designed by our founder-trustee Ritika Sahni for finale ceremony of the Include Vidya Campaign of CBM Saro. The evening was lined with 4 songs sung by her. The playlist consisted of 2 Hindi songs, 1 English and 1 Bengali song. The blind students from Premashree Vidyalaya sang the Hindi songs with her while the deaf students from the Oral School for Deaf Students signed the English song simultaneously as she performed. Lastly, the intellectually disabled students danced to the Bengali song.

A short video about the event can be viewed at:

Love knows no boundaries and it should remain unfiltered; free of judgement and prejudice. To support and spread the word about how everyone deserves to be loved and be in love, we hosted an event called “Love Knows No Disability” on Valentine’s Day, 2017. Trinayani partnered with Mainland China in four cities, namely- Mumbai, Kolkata, Hyderabad and Ahmedabad to encourage people to flip their perspective regarding disability. We invited 12 couples, where one was disabled and the other non-disabled, for a wholesome Valentine’s Day lunch at the local Mainland China outlets. 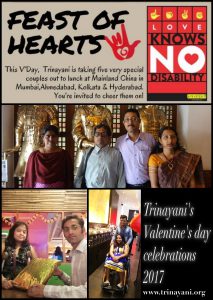 At the UDAAN 13th interact district conference, on 25th September, 2017, Trinayani presented a short skit titled Park Bench, showcasing that disability is not a stigma and it doesn’t take away the normalcy or the social aspect from someone’s life, nor does it bar non-disabled people to befriend people with disabilities. The play was written by Tanmay Bahulekar and directed by Max Fernandez featuring Sunita Sancheti, Kaustubh Tapal and Ritika Sahni. 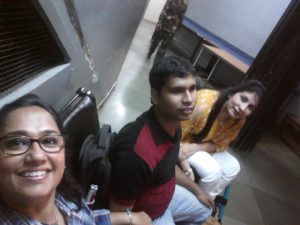 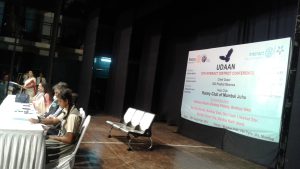 Triyanani garnered a team of twenty friends with varying disabilities to participate in the Champions of Disability category of Tata Mumbai Marathon, 2018. Everyone carried banners and wore headgears which were designed by our creative consultant, Sudipta Mukherjee Mandal. The banners that were carried by the participants had messages about awareness for disabilities and it’s sensitization. 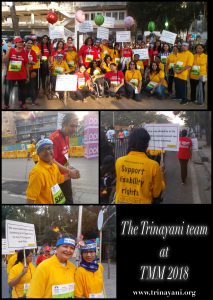 Triyanani organized the Maharashtra State Level Seminar on the Rights of Persons with Disabilities Act 2016 on 10th March, 2018 in partnership with NCPEDP supported by ONGC, with active support from Lawyer Kanchan Pamnani. The motive of the seminar was to familiarise participants from across the state attended this seminar and participated in the deliberations. We invited experts from organizations working with the newly recognized disabilities to give a short presentation about their work. The seminar included presentations by Dr. Sharmila Donde on Parkinsons, a representative from Forum for Autism, Mark Dharmai on Dwarfism, Balshiram Gadhave on Hemophilia, Dr. S. L. Kate on Sickle Cell Anemia and Mrs. Sheila Chitnis on Multiple Sclerosis. The session was interactive and soaked with dynamic discussions regarding the disabilities.

More pictures can be viewed at: https://photos.app.goo.gl/M93Kk3p7wB80Ky2C3 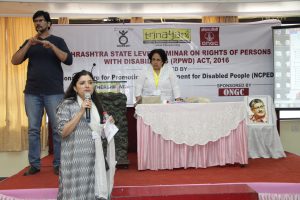 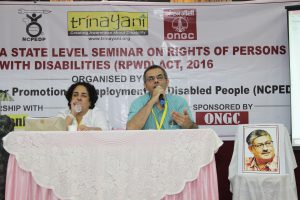 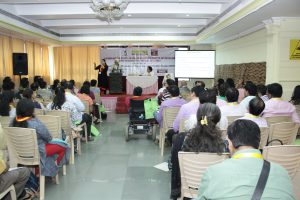 TOGETHER FOR TREASURE- an Inclusive Treasure Hunt

We decided to opt for a more active way to push our cause ahead by organizing an Inclusive Treasure Hunt – Together for treasure on the roads of Powai, Mumbai, with participants from diverse communities. This was on the occasion of International Women’s Day. 5 teams with 6 members each (which comprised of 3 disabled and 3 non-disabled participants) were chosen by lottery. Our participants were as diverse as our country and culture, including persons with visual impairment, mobility impairment, intellectual disability and members of the LGBTQI community.

The hunt started from Heritage Gardens at Hiranandani, Powai. We did extensive reki and the clues, which were written in braille as well as sign language, were kept at various locations in the area like at Aromas, Haiku, Mainland China, Mirchi & Mime. The aim of the Treasure hunt was to bring women with and without disabilities together on a platform that not only promotes equality, but also attempts to embed a sense of realization of interdependence between the two groups.

A short video about the event can be viewed at: https://www.youtube.com/watch?v=nDlm9kKZctI

Carnival Cinemas invited Trinayani to watch the film Andhadhun with 20 of our friends with visual impairment. Though, the film was not audio described, our sighted friends explained the scenes of the movie to them. They were treated with snacks and even got a chance to meet the protagonist of the movie, actor Ayushmann Khurrana. 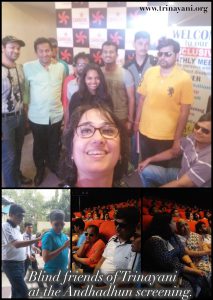