You See Disability We See THIS-ABILITY

At Trinayani we believe that one of the first and most significant steps to changing negative stereotypes and attitudes toward people with disabilities begins when we rethink the way written and spoken images are used to portray people with disabilities. Keeping in mind the very powerful role of the ‘media’, we addressed the media professionals to wield the power of the pen to influence readers to action through a series of articles. 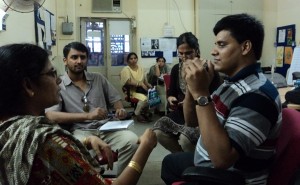 The This-Ability series of articles explores the intriguing lives of persons with disabilities and were published in two National Dailies and several E-magazines.  The rationale behind these series was the need to be saved from having a single story of what persons with disabilities are, as a single story robs us of our dignity, makes the recognition of our equal humanity difficult and also emphasizes how we are different rather than how similar we are.

Through our This-Ability articles, written primarily by Malay Desai along with other guest writers, we try to weave many stories about persons with disabilities. 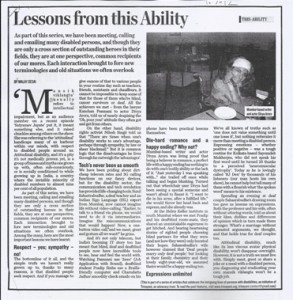 The Articles were published every week every Sunday in the Panorama Magazine of Navhind Times, Goa starting April 2012 till December 2012. The PDFs of these articles are enclosed.

This-Ability articles were also featured on the following websites:

The blog, Chai with Lakshmi:  http://chaiwithlakshmi.in/?s=Trinayani

PDF OF THE ARTICLES PUBLISHED IN TELEGRAPH AND NAVHIND TIMES ARE AVAILABLE BELOW.  Click on the article you wish to read. We urge you to give it some time to download.