To commemorate ‘World Sight Day’ the school took proactive measures by creating awareness about the rampant disability by taking the eighth graders to the Blind School situated at Thondamuthur. As a matter of fact, it’s a global initiative, launched in 1999, which aims to eliminate avoidable blindness by the year 2020.

Partners, including governments, working together under VISION 2020 can make a major difference to the lives of millions of women, men and children already visually disabled or at risk. Preserving or restoring vision can be accomplished at little cost and can help lift people out of poverty. 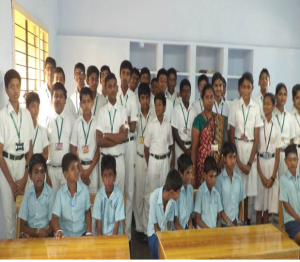 On 9th October, the students were escorted by the faculty members Ms. Suseela and Ms. Shanti left the school around 7:45 am immediately after the attendance and reached the Blind School in order to commemorate the special event, which sparked off with Prayer song sung in unison indeed made the ambience more solemn for the ensuing events. It was then followed by an informative speech delivered by Vidunya, which gave a glimpse on the significance of the day in the broader spectrum. Thereafter, the students of the Blind School enthralled the assembly with the wide array of mellifluous songs, which stole everyone’s heart immensely.

Subsequent to this, a movie titled ‘Little Terrorist’ was screened emphasizing the lofty ethos that regardless of caste, creed and religion, one ought to embrace all religion graciously. The story was then interpreted in Tamil language as they were not well-versed in English. Eventually, the event culminated with the vote of thanks by Ms. Shanti.