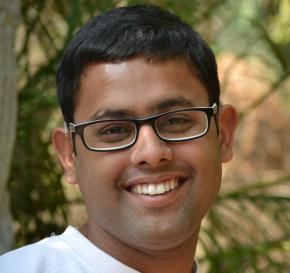 Angshu Jajodia, who has had a hearing impairment since birth, is a post-graduate in Social Work from the Tata Institute of Social Sciences, Mumbai. Earlier, he was not able to speak, but can now converse fluently in two languages and is learning a third. He is a member of SAHAS, an organization working in West Bengal which focuses on empowering parents to teach their pre-lingual deaf children to talk. He is also associated with Trinayani, an advocacy group that works towards the cause of disability awareness and support. He is a Guest Lecturer at a private college where he teaches the social work course and is now a JRF scholar pursuing his PhD at Visva-Bharati University in the field of social sciences.

Angshu often reflects on the world’s pageantry, magic, comicality and pain. This is the first in the series of reflective articles on the issues of disability he is writing on behalf of Trinayani. In this article, Angshu shares his experiences as a child growing up with hearing impairment and gives us a peek into his hearing world.

It has been my experience that many people do not comprehend what hearing loss means. Unlike blindness or locomotor disabilities which are visible handicaps, hearing impairment is a hidden disability that has many shades of incapability. People can visualize how it feels to be blind by simply closing their eyes and trying to go about their daily lives, but one cannot shut down the sense of hearing and see how it impedes the regular business of life. This is because hearing impairment is an abstract concept and to understand an abstract concept in concrete terms is a difficult proposition for anybody who has not gone through and experienced actual hearing loss. It is true to such an extent that one has to be deaf to understand what being deaf means. When the teacher in class questions the inability of the hearing impaired student to take down notes despite wearing hearing aids, she is not displaying her lack of sensitivity to the issue but more her lack of comprehension of the difficulty faced by the student in taking down notes just like any other student in the class.

The first gross misconception that people have is that the hearing aid is a substitute for the normal human ear and since the hearing, the impaired student is wearing hearing aids he should be able to hear as normally as any other hearing individual. But nothing could be far from the truth. Nothing can replace God-given hearing, not even cochlear implants. Cochlear implants merely improve the threshold of hearing by eliminating noise and distortion factors. Hearing aids, both body-worn and behind-the-ear, produce a sound that serves as the background for the deaf child to hear other environmental sounds. The deaf child gets used to this background sound or noise produced by the hearing aid, which is more like a constant humming and utilizes this sound to become aware of other sounds in the environment such as people’s voices or the horn of a car.

Any young child learns language by picking it up from the surroundings. This comes automatically and the child does not have to make a special effort to hear what is being said to pick up such language. But for the deaf child learning language becomes an arduous and doubly difficult task since the child has to make a special effort to hear and learn the language word by word, brick by brick. Deaf children can only make out what is being said; they can never fully hear the actual intonation and import of the words spoken. And yet the challenge for the deaf child is to reproduce the words of the language as other hearing people do. This creates a big gap since the deaf child hears one thing and has to reproduce another. This is one main reason why language learning is such a slow and tedious process for deaf children.

Another misconception that parents of hearing-impaired children have is that if my child is deaf and is not picking up the language because of deafness, then if I put on a pair of good quality hearing aids on him, he should now be able to pick up the language just like any other child. But here we again come to the same point discussed before: that a hearing aid cannot replace the normal human ear; not even the world’s best hearing aids, leave alone good, can replace the God-given hearing. When the deaf child puts on hearing aids, everything he hears is highly distorted and merely pumping up the volume of the hearing aid will only serve to increase the distortion level, leaving the child highly confused. The deaf child needs to be taught to make sense of this distorted world of sound, and here is where the intense training and rehabilitation programme comes in. The child needs to be put on the language-learning train and parents need to be in the driver’s seat and teach the child to learn the language.

Since hearing is so distorted and the child has to make sense of a highly distorted world, the child learns to rely on other inputs like lip-reading, situational analysis and circumstantial evidence to get a more complete picture of what is being said. Lip-reading is a very important arsenal in the child’s armour since many words seem to sound alike, and only a movement in the lips shows the difference between the words produced. Situational analysis and circumstantial evidence are extra tools to help the child make out the words being said, stepping in where lip-reading fails to help the child understand. During the situational analysis and circumstantial evidence, the child analyses the present situation and circumstances and matches the received sound inputs by asking himself, is this what Mama said? Did she mean this, since in this sort of situation it has to be this word she said and not any other? Many a time the child concludes such evidence and analysis and the communication cycle is completed. Though it may seem like a set of independent complicated processes for the reader, mind you, all this happens in a flash during the stream of regular conversation. The faster the child can do this processing, the more normal will conversation flow be. When the child fails to catch up with the flow of conversation it is either because the conversation is moving too fast for him to process all sound inputs, or because too many inputs are received at the same time together making it difficult for the child to process them and continue with the conversation. This happens in a group situation where many people are talking at the same time. From my personal experience, I can vouchsafe that this is the main reason why I am comfortable in a one-to-one interaction pattern while I completely lose my way in a group conversation. It has nothing to do with being unsocial or reticent, though frequently I have been told that I am an unsocial person since I tend to avoid group conversations and stick to one-to-one interaction patterns. In a way, it can be said that the deaf child is completely on his toes and practically lives on the edge when it comes to sound awareness. It may seem like nothing so significant, but on a closer look, it is indeed incredible how deaf children can process at such lightning speed, thus lending all normalcy to the conversation while living on the edge. Is it not simply incredible the way the deaf have reinvented themselves to catch up with the hearing world which they so seriously lack?

In daily life at home, school or work, deaf children do encounter problems in unravelling the mysteries of sound, which requires them to be constantly alert and quickly adapt to changing conditions. Regarding note-taking in class, I would like to draw from personal experience and say why it is so difficult to take down notes that the teacher is dictating to the class. When the teacher dictates, the deaf student, unlike his hearing peers, has to use his hearing and lip-reading to first understand what the teacher is saying. Then only can he write down the dictation? It is more like cracking codes. However, by the time the child has finished understanding one sentence and writing it down, the teacher has progressed to the next and perhaps after. Again the child has to employ hearing, lip-reading and situational analysis and circumstantial evidence to understand the next sentence being dictated. By the time he has understood what was said, the teacher is on to the next sentence, before the child has finished writing the previous one. This creates a backlog of unprocessed auditory inputs and as a result the child completely loses the thread of what is being said in class. And when he throws up his hands in exasperation, the teacher gives a frosty-nosed stare and asks him, why (the hell) can’t you write? What are those hearing aids for, show?